Solar Panels are comprised of many small photovoltaic cells.  Photovoltaic cells are made of two layers of Silicon, dosed with either phosphorous or boron.  Silicon is a semi-conductive nonmetal that allows for the conversion of sunlight into electricity.  When light hits the silicon cell, it causes electrons to be set into motion, which initiates a flow of electrical current.  This is known as the “photovoltaic effect.”

When light hits the top layer of the panel, electrons are displaced between the two layers and a flow of electricity is created.  This electric field forces the drifting electrons to flow in a certain direction- towards the conductive metal plates that line the cell. This flow is known as an energy current, and the strength of the current determines how much electricity each cell can produce. Once the loose electrons hit metal plates, the current is then directed into wires, allowing the flow of electrons out of the panel.

In general, there are two types of solar panels on market today; silicon and thin film solar panels.

Silicon solar panels come in two forms, Monocrystalline and Polycrystalline. Both types have their pros and cons, but Polycrystalline panels are probably the most common panel type. Silicon Panels are the most efficient panel on market, averaging at about 22% efficiency.

As a point of reference, most residential panels range between 15 to 22% efficiency.

Thin film solar panels are commonly found on newer products like solar panel shingles/tiles. This panel type is typically less efficient (averaging around 12% efficiency), which impacts how much electricity a solar system can generate.

So, what exactly are Monocrystalline, Polycrystalline and Amorphous silicon cells?

Polycrystalline solar panels are a newer development and are made of silicon cells melted together. Many silicon molecules are melted and then refused together into the panel itself.  Polycrystalline cells are less efficient than monocrystalline cells but are also slightly less expensive.  These solar cells generally have a distinct blueish hue.

Amorphous silicon panels create flexible solar panel materials that are often used in thin solar panels. Amorphous silicon cells are nanocrystalline and instead are attached to a substrate like glass, plastic, or metal.  This feature allows the panels to be lean and bendable, unlike the standard panel.  Amorphous panels seem to be the least efficient and least expensive panel type.

To learn more about the different panel types, check out energysage’s article ‘Types Of Solar Panels!’ 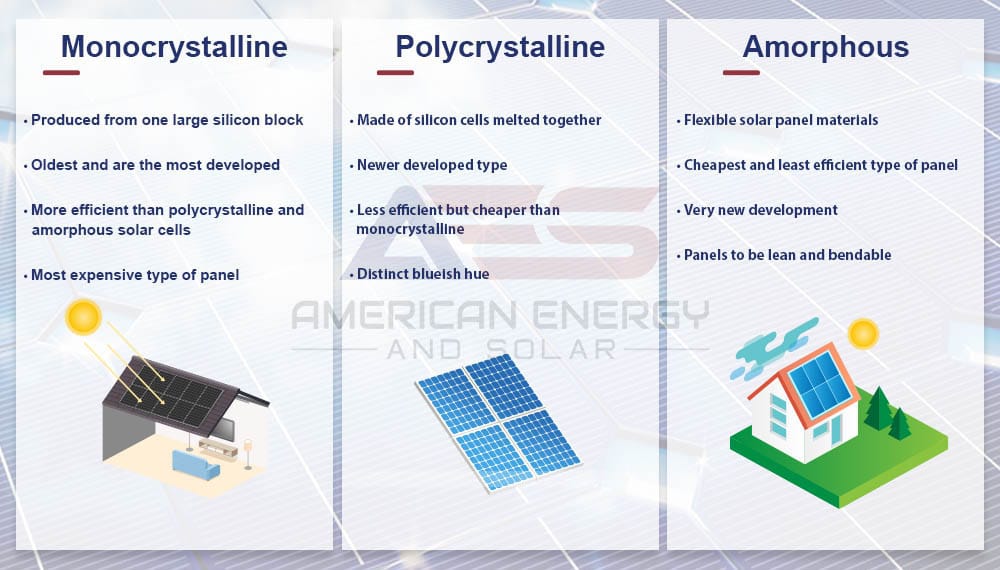 When you install your solar system, you are typically given two options; connect your system to the grid, or install an off-grid system.

Off grid systems are stand alone system, and are usually associated with a series of batteries and backup generators for power storage. This storage is usually tapped into during off hours when the solar panels are not generating electricity (at night for example). Often, these systems make sense for homes located in remote areas, where installing this system is more cost effective than running a power line to the home.

Most solar panels are between 15% and 20% efficient, with outliers on either side of the range. High-quality solar panels can exceed 23% efficiency, but the majority of photovoltaic panels available are not above 20% efficiency.  The more efficient solar panels often come with a higher price tag, especially when compared to their competitors.

American Energy and Solar (AES) is a Las Vegas based consumer-focused aggregator of renewable energy and finance.

In other words, we take advantage of todays historically low interest rates, and couple your home’s existing loan with the total of your solar system installment. The result is a lower monthly mortgage payment and a non-existent energy bill. All at $0 down. More over, you get to keep your 26% cash rebate for your solar system installation. While most companies would take your rebate for their profit, AES wants to keep your money in your pocket!  No hidden costs or fees!

Interested in seeing how much you could save? Try out AES’ custom Mortgage and Solar Calculator for more!

Let’s go solar and save you money. Feel free to contact our experts for more information or check out AES’s Contact Page to learn more!